Who is it that keeps coming here from Cocoa Beach, Florida? You're one of the great mysteries of this blog. I often wonder who you are. I also wonder what Happened to Sarah from Mississippi. She used to comment here all the time and then she disappeared. She left behind a cryptic hint as to her email address. I figured it out and wrote her. I never heard back.
What's to do in Cocoa Beach now that you can't watch the space shuttle taking off? The weather there must be awful this time of year. The weather here at the other end of the country is overcast and somewhat chilly. I like it. I like it here but that's a long story.
I had a little adventure for a couple of months. It was good. I'd do it again. What do you do for adventures in Cocoa Beach?

Life's A Gas- Southern Culture on the Skids (Buy)

In the summer time there are little frogs in my bathroom. I like them. They're almost tame. Sometimes They'll stand on my foot to keep from getting washed down the shower drain.

I know I should be concerned about politics right now, but I get so pissed off when I try that I stopped trying- for the moment. If anybody wants to actually, you know, do something, count me in. I mostly listen to music. Music is good.
Posted by Your driver at 3:11 PM 9 comments:

I'm crazy now but I won't be crazy long.

Beloved leader of the people, Mick Farren, was unhappy about some of the rehab industry ghouls hoping to turn a buck off the recent death of a popular singer. I share his disgust. However, he described one celebrity rehab guru as an, "unctuous TV network 12 step fascist". I have no problems with calling the guy an unctuous fascist and God knows I don't have much use for TV networks but Mick, like a lot of people doesn't know nothin' about the the 12 steps. I wrote him the following,


"Chairman Mick, As a hypnotized 12 step zombie who has lost all sense of self and surrendered all independent thought to the anonymous mind control cult, I can assure you that anyone who claims to be representing the 12 steps or any anonymous group associated with them is, by definition, a fucking fraud. Truth is that all of the various groups ending in A are composed of anonymous amateurs. People who share a common problem and seek a common solution. There are no leaders. There are no professionals. There is no money. I have hung around people professing to be anarchists since my teens. The closest thing I've seen to pure anarchy is a good 12 step group. It's true, you can go to meetings of some 12 step groups and hear some incredibly stupid things being said. That's because anybody is welcome, no one can be denied membership and anyone can say whatever he wants. Even if he's an idiot and a fool.
Speaking only for myself, 19 years ago I was clinging to a shotgun, hallucinating rather vividly and drinking myself to a lonesome and early death. Fate in the form of the crazy girl I was living with intervened and I was introduced to a group of people, many of them almost as crazy as me, who had found a way out of the madness that had engulfed me. They came from all kinds of backgrounds, professed all kinds of beliefs. The only thing they agreed on was a simple plan that included helping other people who suffered from their condition.
19 years later, is my life without problems? Of course not. This is life, not Candyland. I can say that my life means something to me, that I care deeply about the people around me, that I am curious and eager to see what life will throw at me next.
Comrade, I know a fuck of a lot dead people. Many of them were smarter, more talented and better looking than me. I don't envy them even though I still love a lot of them.
Amy Winehouse was more talented than most of the dead people I know but she died about the same as the rest of them. Truth is that there are also a lot of famous and talented people in 12 step groups. You don't know about them. You're not supposed to. I've met plenty of them. When they come into "the rooms" as we call them, they're exactly the same as the newest fuck-up loser to crawl through the door.
I'm not saying the 12 steps work for everyone. I don't actually know everyone. We haven't been introduced. They worked pretty good for me."


Honest, there's no significance to my choice of songs. I've been listening to The Greenhornes a lot lately. This was playing while I typed.


Don't Come Running To Me- The Greenhornes (buy)

The secret world of compulsive writers. 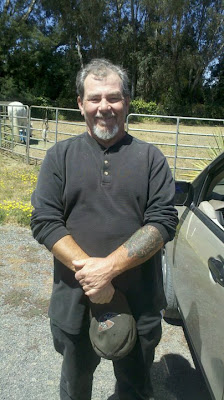 Tim, from Poop In The Pipes dropped by for coffee today. Tim is like me, he writes because he has to.

Look, I have posted some fairly personal and emotional stuff lately. Let me make something clear, what I'm doing here is called writing. I am not ranting. I am not engaging in emotional diatribes. I am thinking my feelings through as best I can and then writing them down while they are still fresh. I review what I've written. I make revisions. I discard drafts and start again. I am trying to take raw emotions and make them into something like literature.

And what exactly is it you do with them when they can't take a joke?
Posted by Your driver at 1:10 PM 5 comments:

Yep, sure enough. I regretted it.
Posted by Your driver at 9:28 AM 7 comments: 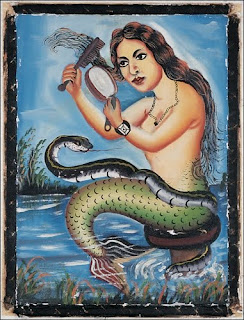 I was kidnapped by a mermaid. She took me to her underwater lair and showed me the secret pleasures of the sea. Now I find myself washed up on shore, wandering the waterfront where the other sailors consider me mad.
Damn, life, boy, it's the only thing worth living for.
The Clovers- Lovey Dovey (Buy)
Posted by Your driver at 11:30 PM 6 comments:

This happened to me.

One time I got up really early in the morning and went for a walk. It was winter time and everything was covered in rime frost. As the sun rose, the frost lit up in brilliant yellows and reds. It dawned on me that everything I thought I knew was actually on fire. Soon enough the world I thought was real would be nothing but dust and ashes.

When I got home from the walk I started to run a high fever. I was feverish all that day.

This was not a bad experience at all.
Posted by Your driver at 4:16 PM 4 comments:

What I hate and why I hate it so much. 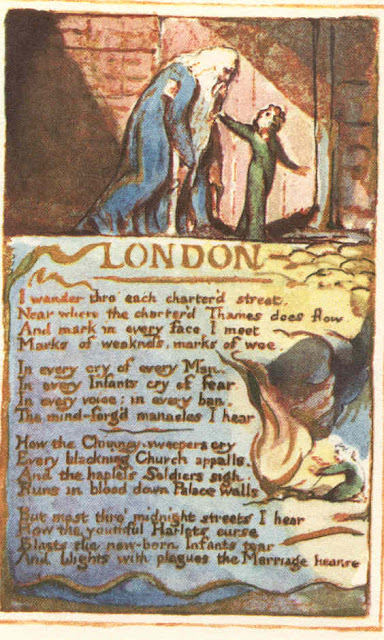 I sure am glad I don't have a television. I mostly stay away from newspapers too. It's not hard to keep track of whatever I find interesting. I like the internet. I can filter out some amount of the crap that is being fed to me.

So Mr. Hope and Change is escalating four wars while negotiating cuts in social security and medicaid. Let's get clear on something, sociopathy is the norm. We live in a society where virtually everyone has embraced the role of victim or perpetrator. Most of us are happy to play either part depending on which role the masters demand of us. Our job at the moment is to uncomplainingly shovel babies into the jaws of Moloch, 24/7. Whatever it takes to keep us on the job is what we can expect. The word from on high is that Moloch hungers and we must have our rations cut to satisfy him. Buckle down and hope for better times. His appetites cannot be denied.

So that's what our free enterprise system looks like to me; a world of slaves who feed themselves to an inhuman archon and struggle to meet his expectations; a death camp where the prisoners guard each other while they wait for their time in the ovens.

But what about our exciting lives? Our favorite shows? The edifying spectacle of news and information that forms our opinions. Why am I talking shit when some woman has murdered her own child? Am I incapable of compassion? Why can't I see that I am engaged in idle chatter while a terrible injustice has gone unpunished?

My fucking point exactly. A woman has failed to meet her assigned role. Her job is to prepare that young life for destruction not to destroy it herself. Who does she think she is? That child will never be free to know the joys of subservience. Isn't that woman contemptible? Well, I suppose she is and even our bleak world has it's bright moments. Everyone deserves their chance at whatever happiness this world might afford them. No one should be murdered. Right?  Especially not by their own mother.

Let's get clear on something else. Society talks a lot of shit. We find it convenient to talk shit about protecting the innocent but societies reproduce themselves. Every institution in any society exists to perpetuate that society and regardless of any pious hypocrisy, when ever an institution, the family, the church, what fucking ever, is doing something again and again, no matter how little you like it, that is one of it's functions. Brutality, terror, rape, murder and incest are as common as bullshit in our society and that's because they are functions of society. I'll admit they're some of the more extreme functions but they serve the same purpose as every other mechanism: to produce properly functioning members of society.

And so what if some percentage of society is broken and insane? Let them serve as a warning to the rest of us. Let them bear the burden of society's dark side. Let them remind us of what good mommies and daddies and babies are supposed to be like. So long as we have bad TV mommies to hate we don't need to look at the whole evil institution or question our compliance with it. The archon reigns supreme and we live at his sufferance.

I am hurt and angry right now. I am not avoiding the specifics of my feelings. My mood will change. My heart will lighten. I will not worship the god of this world.
Posted by Your driver at 12:04 PM 9 comments: