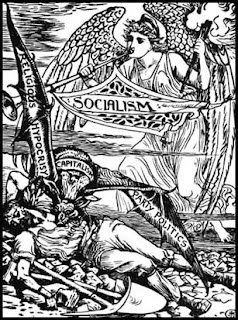 I'm pissed off and I have no place else to vent. I just read something at a supposedly radical web site. A young woman was apologizing for the fact that she had a job in a corporate office. She wished that she had an anti- capitalist job like her friends who sold craft stuff at fairs, or did piercings, or owned tofu restaurants. She said that her corporate job meant that she was a capitalist but at least she opposed capitalism by not owning too many toys.
How pathetically smug and middle class and just plain right wing is that bullshit?
I guess it's true, the Reagan revolution is complete. College educated neo-hippies are repeating all of the fundamentals of Reagan's shitty ideology and patting themselves on the back for being radicals.
Look, the great majority of the human race works to enrich a tiny minority. Most of that majority sees next to none of the wealth they create. I'd like it real well if most of us were paid for the wealth we create. I don't give a shit what workers do with their wages so long as the wages are just and allow for a decent standard of living.
And then there's that idea that everyone could chose to be a DJ, or a clothing designer, or an artist and only stupid uncreative non revolutionary people actually work for a living. Is that some smug, privileged rich kid bullshit or fuckin' what?
Look I have good friends who are real old time 1966 Haight Street hippies. None of them would ever say anything that stupid. Let me make it clear, I'm not talking about them, but Jesus Christ on a motherfuckin' crutch I hate hippies.
Or as I once told a "punk" who told me I was a square for being a bus driver, "That's alright chief, you call up Daddy and tell him you've thought about it and you're ready to go back to UT for that MFA degree. Ya fuckin' asshole."
Posted by Your driver at 7:59 PM 6 comments:

Oh the hell with it, you win

Blogger refuses to show any of the content of my previous post. It was working for a while there, sigh.
Posted by Your driver at 10:34 AM 3 comments:

Don't worry about it

Dear Ib and Beer, you guys check here faithfully to see if I have anything to say. Don't worry about it. I'll let you know if I have time to revive my blog. Yesterday I spent three hours in an endless convoy of Armadas, Escalades and Titans. I mean it, one gigantic personal vehicle after another. Each one with an angry looking white man at the wheel and no one else on board. In three hours we were able to drive 65 miles. Lucky they had those powerful engines. Even luckier they had those gigantic gas tanks. I'm no automotive puritan. I don't subscribe to the religion of consumer holiness. There's a lot of consumer self righteousness around here, and I have no more use for it than I have for other kinds of self righteousness, but it does seem a little bit silly to spend $50,000.00 for a 7,000 pound truck with a 350 horsepower engine, just so you can drive 15 or 20 miles an hour. If I wasn't being paid, and some hefty overtime money at that, there is no fucking way you would have gotten me out on that freeway, but there they were, hundreds of thousands of them all claiming their little piece of 3 northbound lanes.
I am tired.
Posted by Your driver at 8:05 AM 3 comments: