Not quite dead poets 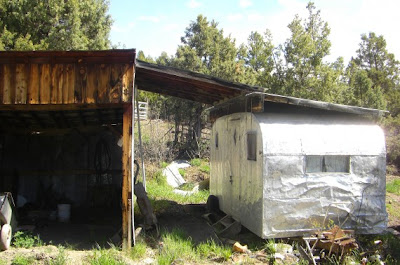 I once lived in a place that looked almost exactly the same as this. It was a tad crude but I was happy.

I'm sorry I haven't been keeping up here. I've turned into a facebook asshole; flirting with elderly high school crushes and posting you tube videos with witty comments.

So, once again, the writing bug bit me at an odd moment and I went into a long reminiscence about a landlord I had more than twenty years ago. We had a falling out when his wife decided she didn't like my girlfriend and evicted us. I'm glad I had a chance to make up with him a few days before he died. He dropped stone dead while working. He was always working. I doubt that death will find me working.

Here's what I had to say.

"Good news is that it's been a hell of a spring for birds. I've got bluejays, house finches, and gold finches at my feeders. In the winter I also had juncos and sulfur crested sparrows. A pair of western bluebirds are nesting right outside my kitchen and a pair of hawks are nesting up high above them. Wild turkeys, which had disappeared from the county back in the '40's are now so common that everybody is sick of them. An immense herd of tom turkeys wanders back and forth through my yard, gobbling and displaying.
I was renting from an old time bird watcher, and Klan sympathizer and general racist nut case, when the first turkeys were seen around here. He was thrilled. He was a hell of an odd guy but we got along. He knew more about local wildlife than anyone I ever met and he managed his farm using old time sustainable practices. He composted religiously. He had planted douglas firs as windbreaks when he was very young and they had grown into magnificent stands of trees around the property. He made it a point to leave hedgerows and wildlife corridors around his orchards.
There was an old Pomo indian shell mound/midden heap in his lower pasture. He told me about it but he swore me to secrecy. "If anyone finds out about it, I'll have the goddam government all over me telling me how to run this place." He did spray chemicals on his orchard but I have never seen as many different birds as I saw around there.
He and his wife were both addicted to pain pills and they were mean as cat shit when they got a few drinks in them. His wife was a literal castrating bitch. The old man got prostate cancer and the doctors cut off his balls to try and stop it from spreading. I rarely saw her as happy as she was the day he came home without his nuts. I think she kept them in a jar and hid them.
He was quite well to do and lived very comfortably but he worked constantly. When he was in his 70's he was stronger than I was in my early 30's. He worked every day, all day, on his many cars and trucks, or cutting down old trees and bucking and splitting them for firewood. He had a beautiful old barn full of every kind of tool you can imagine, many of them antiques handed down to him but still in use. He had a complete set of 19th century hand logging tools.
For all of his tough guy bluster he was really a gentle guy. He knew and loved the wild animals around his property. I never liked his wife, partly because she made him kill some of the hawks after one of them killed some of her pet chickens. It clearly cause him great pain to go out after those beautiful hawks. The old lady gloated over their corpses.
I always figured he was such a racist because he was trying to add a little glamor and excitement to his life. He was extraordinarily privileged and comfortable and I suppose that seemed sort of dull to him. He liked to imagine that he was facing all sorts of adversity but he was tough enough to handle it. I'm sure that his fantasies about having to protect himself from the government, the Jews and the Blacks were very pleasing to him."

I'm back to work two days a week. I'd like more money but I don't want more work. I actually love my commute. I get up early, ride an express bus to San Francisco, stop for coffee and then head over the Bay Bridge to West Oakland. I love sightseeing along the way. I get to see all of the construction on the new Bay Bridge and I see how many ships are in the port of Oakland. I like living in the country but I am not an anti industrial neo hippy. I love seeing big, big things. The port is the product of thousands of years of human endeavor. People have been crossing seas and trading goods since before we took up agriculture.

After working 22 years for a bridge, I love bridges. The new Bay Bridge is huge and might actually be beautiful. I love seeing the hundreds of cranes, work boats and barges working on it. I feel lucky to even look at all that knowledge and skill in action.

I'm doing paperwork and learning the Department of Transportation's new system for quantifying bus safety. It makes some sense and it holds bus companies responsible for some of their unsafe behavior. Ever since deregulation in the '80's the trend has been to let companies engage in wildly unsafe practices and then hold the drivers responsible for accidents. I am really unimpressed by the performance of the Democrats in Congress and the White House but Obama's appointees at the DOT and the Department of Labor might actually do the world a small amount of good.

I'm lighting candles to the Virgin of Guadelupe and Kali Ma, keeping the spiritual road open and trying to do my little bit to make the physical highways safe.

The Victory Travelers- I Know I've Been Changed (buy)
Posted by Your driver at 11:19 AM 8 comments: