I finally got to see the movie "Mirrormask". What a great movie. How can people even sit through crap like Star Wars? This is not my favorite scene, but it's the best video available. Go see this great movie. Dude.
Posted by Your driver at 6:27 PM No comments:

While I'm busy pissing people off


If you are already offended by my last post, Twisty at I Blame The Patriarchy is sure to send you right around the fucking bend. That's why I like her so well- She's some old cranky woman ( she's my age) living out in the weeds in Texas and she has no use whatsoever for the dominant paradigm.

Well, ya know, the dominant paradigm is all about the supposed sovereignity of the individual and the importance of fuckin' them before they fuck you- and by the way, how's that working out for you?

Anyhow... thanks to Twisty, I saw this video about the Gulabi Gang. Further proof that solidarity is the fundamental spiritual quality that makes life on Earth even minimally livable. 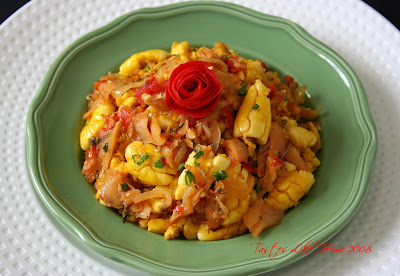 Ackee and saltfish from a very nice cookbook, "Tastes Like Home".

As I've said elsewhere, I post my best stuff at other people's blogs. I would encourage you to read Brother Peace Maker's excellent piece, "Never Owned A Slave". This was my comment:

"As a white man I’d like to ask a question. Why are white men so universally stupid? The answer is: because we have no incentive to stop being stupid. We have managed to so arrange the world that everyone else on Earth has to do our thinking for us. You all have to understand us, be aware of our needs, do all of the work we refuse to do and rush to comfort us if we feel disturbed. Not surprisingly, most of us like this arrangement just fine.

We have the minds of children or psychopaths. When we berate you for “playing the victim”, we are really saying, “How dare you squirm while we stand on your neck?”

OK, seriously, I was one of those people whose family “never owned a slave.” We were hardworking fishermen in the Canadian Maritimes. As far from the slave trade as you could get. Right?

Turns out those Canadian fisheries were subsidized by the British Empire to provide a cheap protein source for the vast slave plantations of the Caribbean.

My ancestors worked on ships called Grand Banks schooners, light fast sail powered fishing boats where cod could be salted and stored, then quickly transported south to the islands.

You know that traditional Jamaican fondness for “salt fish”? Yeah, that was my great, great grandfather’s work. My people lived off of the slave trade for generations.

We in the church do not like to hear it mentioned that, at one time, The Church of England was the largest slave holder in the British Empire. Lambeth Palace was built with profits gained by working literally millions of slaves to death at an early age.

The fact is, when a great crime is perpetrated against humanity, the African slave trade, the destruction of the Native people of this continent, only a willing and deliberate fool could claim that there were no consequences involving their place in the modern world.

Now, stop bumming me out with all of that playing the victim. I’m going to go pretend that I come from simple fishing folk who lived in a tiny harbor community and worshipped at a humble wooden chapel. Oh, and I worked hard for everything I have."


I thought I was a pretty hip guy. I didn't know any of this stuff until I read "Cod: A Biography of the Fish That Changed The World." That fucked my head up so bad that I had to read Adam Hochshild's "Bury The Chains-Prophets and Rebels in the Fight to Free an Empire's Slaves".

You can learn something new every day.

If Only I Lived In Brooklyn 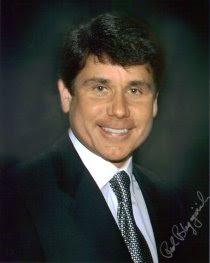 Like Rod Blagojevich, I find comfort and meaning in poetry.

The editor of POETRY magazine objects to poets calling each other assholes. Am I a poet? I have certainly been called an asshole.

If forced to read a poetry journal, I would prefer to read Vowel Movers.

The Best of Lefty Frizzell
Posted by Your driver at 11:06 AM 1 comment: 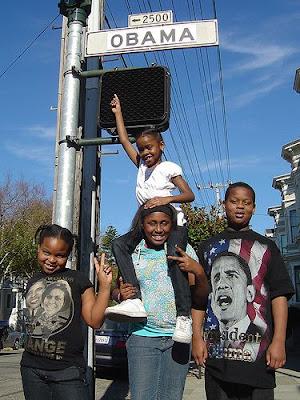 Somebody went out last night and changed every single sign on Bush Street. Every single one of them!
Posted by Your driver at 7:33 PM 5 comments: 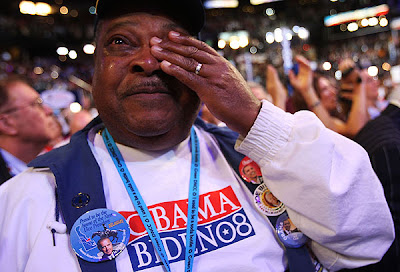 I got to watch Obama take the oath and deliver his speech. I watched it on TV in the break room at work and I can think of no better place to have seen it. A whole bunch of drivers, more than half of us Black, were jammed into the room, with more of us down the hall straining to see in the door. It's a good thing the lights were out, because more than a few tough old timers had to shed a tear before it was over.

It's a good thing Obama is a classy guy and a gentleman, but I am not. I could spit on that hateful old bastard, Dick Cheney. He hurt his back, did he? He refused to stand up for a Black president and the wheelchair was a pathetic excuse. I bet his dog ate his fucking homework too. I kept hoping there would be a real accident and someone would push him and his wheelchair down a flight of stairs.

Little Bush looked relieved. He was in over his head, his daddy couldn't save him and he seemed glad to put the whole thing behind him. Personally, I think he should be sent to Baghdad to be tried for his war crimes.

OK, so those dark thoughts invaded my mind, but otherwise it was a beautiful moment. When the speech was over, there was a lot of hugging and then half of us ran out the door to pull our schedules. Most of us were late, and we apologize for delays in service but fuck it. It won't happen again.
Posted by Your driver at 6:17 PM 3 comments: 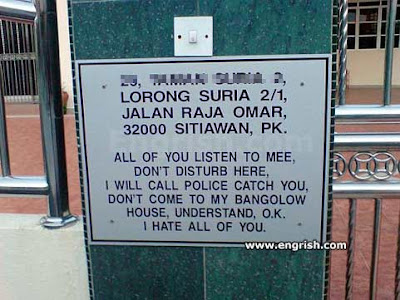 I found this image at MF Rox. MF is some kind of a friend of friend of mine. I've never met her but I loved her blog when she was living in China, and I even like it now that she's in Michigan.

Really, I'm not avoiding anyone. I'm just busy as hell. I've got major health issues that are under control, but take a lot of time. Plus, I'm feeling a little blocked. Anything I could say about Gaza is being said better elsewhere. Everything else is a little hard to focus on. I can't keep my thoughts from wandering back to the slaughter there.

I've been playing my ukuleles a lot. The other night, I worked out a surf song by Dexter Romweber. Sounds swell on the uke. No Dexter, but here's The Insect Surfers.

Psychotronic - The Insect Surfers
Posted by Your driver at 8:40 PM 3 comments: 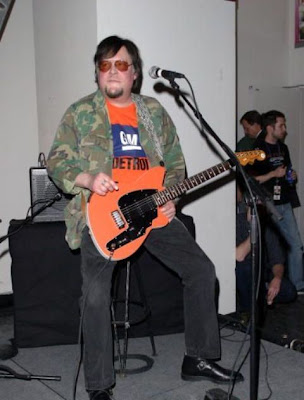 I've been on my old sweetheart, Kimmie, for years. She has got to write her memoir. Unfortunately, it took the death of the great Ron Asheton to get her started. She's written a brief reminiscence about her encounters with the Stooges circa 1973. Man this is long overdue. Click here.

Just to jog her memory, here's a picture of my old friend, Bob, back in our Ann Arbor days. 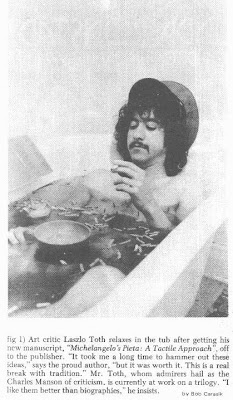 
I'm having a hard time convincing our Canuckistanian readers that they have it good. Maybe it's because things suck so very bad down in the Land O' The Free. Canadians look like they've halfway got their shit together compared to us. My friend, The Gazetteer posted this terrific video from the Elvises of the North, DOA. As you can see, their Elvises are a little rowdier than our Elvis.Watch as DOA takes it to the ice and settles up with the forces of capitalism. Takin' care of business.
Posted by Your driver at 11:31 PM 3 comments:

In the interest of fairness 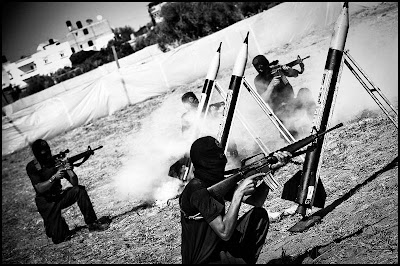 The American press has shown only a few images of the suffering in Gaza. They like to show those cinematic images of cool explosions off in the distance. They're also not showing many images from the Israeli side. Shown below is an Israeli picture of the damage done by the legendary Quassam rockets. This morning, NPR claimed that the sound of gunfire was coming from Hamas anti-aircraft guns. Hamas anti-aircraft guns? Hamas looks to be spending the bulk of their military budget on ski masks. 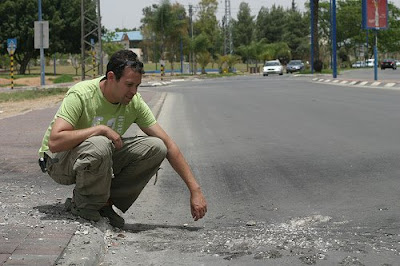 There's no good guy when both sides decide it's OK to kill people. However, one of the bad guys is acting very badly. It's been claimed that Hamas is using weapons provided by Iran. I don't think you need to go all the way to Iran for the makings of a pipe bomb. Israel however is quite openly using billions of dollars worth of US supplied weapons.
The top image came from the truly disturbing Zoriah blog. The bottom image comes from an even more disturbing set of photos posted at the website Palestinian Mothers.
Posted by Your driver at 8:04 AM 2 comments: 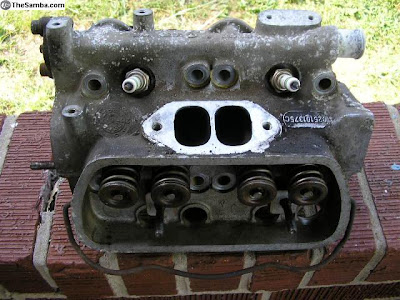 Volkswagen Van
a poem for Mr. Beer and Hockey

I told the guy I wanted to hook
It up to a diagnostics machine
He said, "Go ahead"
And handed me the keys

The guy at the shop
Said, "Don't bother.
Listen to that. The engine
Is Shot"

The Grateful Dead were singing
"Truckin'"
I almost bought the fucking thing
Anyhow
Posted by Your driver at 4:14 AM 1 comment: 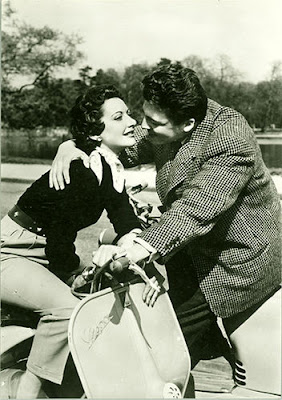 Just a swell picture. I've just slept for ten and a half hours. I'm listening to Merle Haggard sing Jimmie Rodgers songs. There's no shortage of misery in the world, but for the moment, here in trailerville, life is good.

Anniversary Blue Yodel - Merle Haggard
Posted by Your driver at 11:16 AM 2 comments: