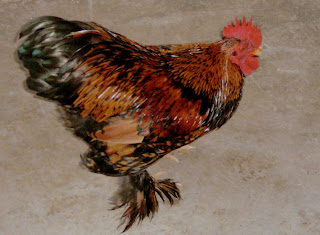 This little rooster was my good friend. A fox found our little family of chickens. It carried off a chicken every other day. The lone survivor was my friend, the rooster. He managed to last for a week and a half after his little wives had been killed. He was damn near crazy with loneliness and he would follow me around and stand next to me any time I left the house. I felt bad for him. He disappeared sometime today. He was a good rooster. He was kind to the hens and chicks. He wouldn't eat until they had eaten and wouldn't roost until he was sure they were safe. His little flock was prosperous and healthy under his leadership.
He had been hand raised by a young boy and he was always friendly and curious towards humans. He would eat out of my hand if the hens would let him. He would run to see me, flapping his wings and pausing to crow.
He was an uncommonly handsome bird. I will miss him.
Posted by Your driver at 11:52 PM 4 comments:

Good Old Boys, Or, Why I Live Here 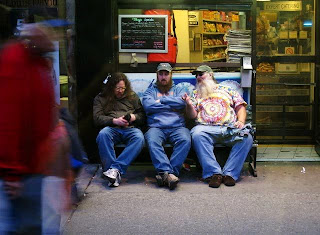 I'll have to admit, I don't get it. I don't really know why Southern White people with no money would identify themselves with the flag of the Confederacy. I get that poor white southerners feel like a separate ethnicity or culture or something. I know I was thinking about "If That Ain't Country" by David Allen Coe. I watched a video of Coe performing it. It's a simple little song, but he makes a hell of a case for poor white southerners as a misunderstood and disrespected minority and he makes it playing a guitar decorated with a Confederate flag.

There aren't many poor white people in Northern California. There aren't that many genuinely poor people here. It's too damn expensive. We have a few people around who sort of fill the good old boy niche. They look like the guys in the picture above. They sit around and talk about Grateful Dead shows in 1967, what pot is selling for these days and why the Republicans are the cause of the world's woes.

Just then a cranky looking old white guy pulled his pick up truck into the parking lot. He was driving too fast and he looked like a bit of a mean old guy. He had a bunch of bumper stickers on the back of the truck. I couldn't see all of them but I could see that he was an NRA life member and a member of The Marine Corps League.

His wife got out of the truck first. She had to help him a little. It took him quite a while to get out of the truck. He was a dried up old guy and it looked like everything hurt. I could see where that mean look came from. I waited for him to walk past before I pulled out of my parking space. I drove past the back of his truck and checked out the rest of the bumper stickers. There were a couple more NRA stickers. There was a big red and orange sticker that said "Once A Marine Always A Marine". There was a sticker that said, "No Farms No Food". There was also a sticker that said, "War Is Never The Answer, Wage Peace" and another that said "No On H8- Everyone Has The Right To Marry."

Honor your heritage, stand up for who you are and call 'em like you see 'em and damn the consequences. God, I love it here.


Poetry is for assholes and I am an asshole. It truly doesn't get any better than Amiri Baraka. I'm sorry to say that I have not
spent as much time as I should listening to women poets of color but a lot of what little I know about life, I learned by taking
the plugs out of my ears, sticking a plug in my mouth and listening to non white artists and thinkers.

The Confederacy can kiss my Yankee ass 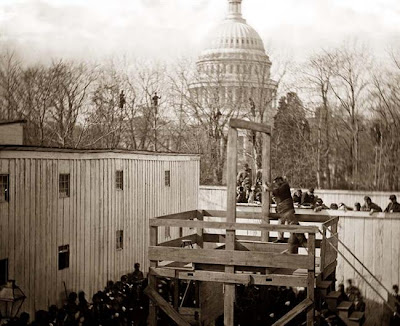 The execution of a Confederate war criminal.

I haven't been posting much. I've been busy. Life is swell although I'll have to admit that I was pissed off about the whole Confederate History month thing. The subsequent "Whoopsies, we forgot about the slaves!" episode only pissed me off a bit worse. The Atlantic slave trade, the basis of The Confederacy, was one of the great crimes against humanity. The states rights argument which has been drug out time and again to justify outright racism is bullshit, plain and simple. The latest variation, "But there were Black confederates and lookit all them Black conservatives", is bullshit too.

I got somewhat pissed at a friend of this little blog for reviving some of those arguments. She's good people and a fine writer, but she's just plain wrong this time. I tried, and obviously failed, to keep my sense of humor. She can delete my comment. That's OK. This is not necessarily a free speech zone. I'm not going to link to her post. I will add two things. First, I'm aware of the fact that Lincoln was a Republican. I'm also aware that he was no champion of civil rights or the Black race. I went to liberal Yankee schools where I studied history. Second, this is not an altogether anti southern post, but really, fuck the Confederacy.

Here's what I said;

"Oh friend, if you make it to the end of this one, we are probably not going to be friends anymore.
It's a well known fact that I am a communist from Northern California. I believe that only homosexuals should be allowed to become bishops in the Episcopal Church, that all women should have an abortion whether or not they are pregnant and that all men should be forced to marry a gay person. I believe the federal government should force my beliefs on everyone.
I am aware of the fact that there are possibly as many as 37 Black conservatives in America. I have known one or two, although I have never seen two at the same time.
I am also aware of the fact that there are people who liked to be tied up, humiliated and given enemas. I have seen several of them together at once, although I don't understand them either.
I also know that many people are convinced that we have a two party system, not like the communists who were only allowed to vote for competing communist candidates. Here we have a choice of two candidates each of them representing different corporate interests, neither of them representing my interests.
Some people are stupid enough to believe that the oil and coal corporate party is the party of freedom. It is the party of oil and coal. I can tell the difference. I do not listen to the radio or watch TV.
As to the Confederacy, here's where we truly part company. I'd like it real well if all memory of the Confederacy was buried. If the burial ground was plowed and sown with salt, that would be even better. I'd like it if flying a confederate flag was considered an act of treason. I'd like it if confederate nostalgia was criminalized the way nazi nostalgia if criminalized in Germany.
I am real tired of sending endless federal dollars to the south and then hearing about how awfully the south suffers under the cruel burdens of medicare, food stamps, federal highways, school lunch subsidies, social security, unemployment insurance, workplace safety requirements, etc etc. If there weren't innocents involved I'd say we should grant you your wishes, stop sending money and let the south slide even further into third world poverty. Maybe Mexico would help you out.
Finally, if you insist on believing that we have two parties, look at the statistics. In the southern states, voting is almost exactly along racial lines. Black southerners consistently vote to the left of most northern Democrats while White southerners consistently vote the same as northern Republicans. Stop trying to hide behind black folks."


While I'm passing new laws for the south, I'd like if they made it illegal for people named Hank Williams, but who aren't really Hank Williams, to stop releasing records under the name Hank Williams. .If Pisspants Braindamage Williams and Pathetic Richkid Poser Williams want to keep releasing records that's OK. Just stop trying to trade off your tenuous relationship to a talented dead relative.
Posted by Your driver at 2:00 PM 12 comments: