This guy got on my bus 15 years ago who turned out to be this guy I hadn't seen in 20 years. In the meantime he had acquired a soon to be ex wife and a sweet terribly serious little boy. We made friends again and the little boy grew up. Along the way, the kid developed a taste for alcohol and weed and pain pills and lies. He ended up pissing everybody off so bad that he checked into rehab at the strong suggestion of his entire family. He finally decided that maybe that wasn't such a bad idea and he's been sober for almost a year and a half. Somewhere in there he picked up a guitar and became a pretty good player. He gets a big kick out of the fact that his dad's old friend is sober and we hang out together on our own now. He's been saying we should get together and learn a song sometime and today was the day and this was the song.

It was funny for me because he can play all kind of weird jazz chords and he knows all of this music theory and he can improvise in keys that only dogs can hear but he did not know how to play a country and western waltz. I got to get him up to speed on 3/4 time and led him through the chord changes chanting 1-2-3/ 1-2-3.

He suggested that maybe it would be cool to try playing the song to some kind of speeded up ska beat. He thought that would make the song sound funny and not so serious. I had to explain to him that the song is already funny. Apparently he hadn't considered that possibility. I sang it to him in my best super sincere country western voice and he had to admit that maybe it was a funny song after all. He played me a really funny song he wrote about having sex with farm animals.

The hardest part of "Pardon Me" is the spoken word part. You have to sound like you are just talking casually but pace yourself so you say the last word just as the guitar plays a G chord. We just barely got that going when it was time to leave.

I dropped him back at his house just before the Giants game started. He said, "I really wanna see the San Francisco Gay Hippies beat the Texas Oil Assholes." It didn't happen tonight but it's nice to know that every Giants victory is a victory for gay hippies everywhere. I keep thinking that it's my imagination that the World Series is about politics but the TV kept showing that notorious asshole and murderer George Bush. I was watching the game in a taqueria for a while. Somebody said "Bush really looks like shit." Somebody else said, "Good". To me he looked pretty hung over.


This is as lovely a Bay Area moment as I have ever seen and I don't even like Journey.
Posted by Your driver at 1:13 PM 4 comments:

I'm a fair weather newbie fan, so fucking what?


Nobody here but us Giants fans. Good to know that San Franciscans are still all about "fuck you".

I haven't really followed professional baseball since the Mets won the 1969 world series. I am really enjoying this world series though. After hearing, for years, that San Franciscans aren't really Americans, from tourists for chrissakes, it is a real pleasure to see George Bush's baseball team beaten by San Francisco. I know this makes me not a real fan plus how dare I confuse sports with politics? All of that. I don't care. This is fun. Texas fans are scandalized by Giant fans smoking weed in the stands? Personally I think that gay Giants fans should scandalize them worse by kissing in the stands. As Soupy Sales once said, "I'll kiss you between the strikes and you can kiss me between the balls." Sadly the series is moving to Arlington. I'm sure Arlington has a really nice Walmart and I'll just bet they have a really good TGIFridays too. As the Talking Heads once said, "I wouldn't live there if you paid me." Go Giants.

Apropos of nothing whatsoever, I really like The Thermals first ep. They have some other good stuff but this is the one for me.

No Culture Icons- The Thermals (Buy)
Posted by Your driver at 11:53 AM 4 comments: 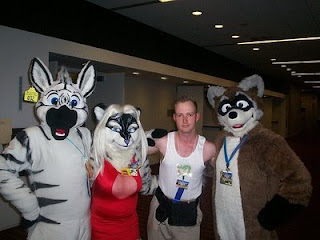 Originally posted at John Shirley's Facebook page.
A work friend very earnestly explained to me that his wife did not understand his desire to get together with other people who are "interested in exploring anthropomorphic animal costumes". I about shrieked, "Holy shit! Are you a furrie?"
He started looking all serious and said, "Why? Is that a problem for you?"
I think his wife should restrict his computer privileges. This is a man who has already admitted to me that he has built his life around ideas he learned from Star Trek.
Moody-ESG (buy)
Posted by Your driver at 7:15 PM 5 comments:

So the other day I'm watching this interview with some guy I've never heard of. He says, "Writing is for people who like to be by themselves but also feel this need to communicate." That sums it up. I don't write much and I don't write for noble, world changing reasons. Sometimes I need to tell somebody something

A Perfumed Garden- The Television Personalities (buy)
Posted by Your driver at 12:13 PM 2 comments:

Like I've said, all my best stuff gets posted elsewhere. A few days ago a friend sent me an article about Detroit. It set off this long reminiscence about life when I was 19 or 20 years old.

"I moved there 37 years ago and huge areas of the city were already abandoned. I used to live in one of the semi abandoned mansions near Indian Village. 13 of us were renting a 10 bedroom house with servants quarters and horse stables for something like $150 a month. It was as insanely dangerous as the South Bronx or Alphabet City (Back then) but cheap to live, tree lined and you could get a two day a week student job in the car factories for union wages. If you were lucky one of your two days was Saturday so your pay started at time and a half. For a while there I was even living on my earnings working one day a week at Chrysler's Jefferson Avenue Assembly plant. It was the weirdest mixture of Industrial culture, apocalyptic urban collapse and '70's bohemianism.
Cheap rent, high wages but there were no grocery stores, drug stores or laundromats. You had to take a long bus ride to the suburbs to buy fresh vegetables or do your laundry and anything that wasn't left locked up with serious hard core locks would be missing when you got back. Everyone (except me and my friends) carried a gun and people got shot all the time. When I was living in a row house near downtown someone kicked in our back door while we were upstairs. We thought about going downstairs and then realized that who ever it was had heard us and they hadn't left. We figured he'd kill us if we went downstairs so we stood at the top of the stairs and cleared our throats until he left. (Ahem, ahem) There wasn't really anything to steal so he ended up loading a box with all of our groceries and stole the little radio that was our only source of music. Everything else had already been stolen earlier.
I find it amusing that some of the trendiest anarchist ideas being advocated by dreadlocked vegan trustafarians were originally developed by friends of mine in Detroit. They were mostly young autoworkers taking classes at the Harvard of the industrial proletariat, Wayne State University. I still sometimes hear from those guys and I don't think they're impressed with their followers.
A while ago I ran into one of my old radical roommates from those days, a (then) young Black guy who grew up in Harlem. Now he's a shop steward for the San Francisco City electrical inspectors. He's married to an old radical girl from back then. They own a house in an outer neighborhood in SF and talk about moving to the Sierras when they retire."
A little further reminiscing, My roommate Jim was a tall skinny hillbilly intellectual from some little town in upstate New York. He had a badass Mercury Cougar with alloy wheels and wide tires. He used to be a heroin addict. Then he was an auto worker. He said that factory work was like being a junkie. A year or two would go by and you couldn't remember anything but a couple of bad days and a couple of good days. All of the other days were the same. 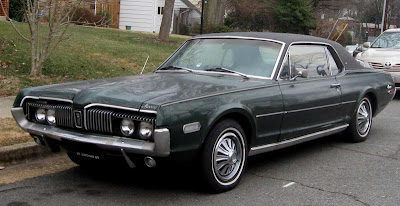 One morning we woke up and Jim's car was sitting in the alley without wheels or tires. The thieves had courteously left the car propped up on cinder blocks with a full tank of gas. We had already been robbed of our little radio and the house was so cold that turning on the furnace was more an act of defiance than a remedy for the cold. We gathered up our tiny collection of 8 tracks and went out to the car to get warm, listen to music and drink. We were having as much fun as we were capable of, even if we didn't know it.
Below Your Means- Alice Cooper (buy)
Posted by Your driver at 11:32 AM 9 comments: