Video is of a crazy lady on a BART train.

Late one night, a friend was driving a bus. His only passenger was a crazy lady. The crazy lady was cursing and ranting to no one. Suddenly she stood up and walked to the front of the bus.

"Driver," she said, "There's a woman in the back of the bus who is being quite abusive. I can't stand having her talk to me that way."

My friend thought that one over for a minute and said, "Ma'am, what I need you to do is go back there and tell her that I will not tolerate that sort of behavior. Tell her that if she can't behave herself I'll have to ask her to leave the bus."

She walked back to her seat and delivered a stern lecture to her reflection in the window. After that, everything was quiet.

When I saw the picture below I had to ask, "Who is that fat old motherfucker? He looks overfed and underworked and just too goddam cheerful to be me." Then I remembered that, when I was overworked and hungry my great dream was to survive long enough to find an easy job and a soft situation. It took time

This is me, parking buses in the rain. 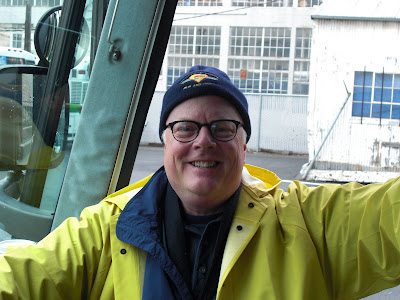 Photo taken by my brother bus parker, Chris.
Posted by Your driver at 7:13 PM 7 comments:

Not what I was thinking 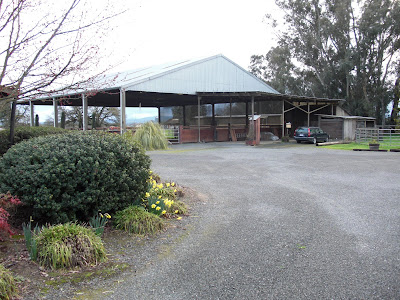 The entry to trailerville. My beloved sheet metal home can be glimpsed beyond the riding arena.

I thought a ton of thoughts today. Boy was I gonna blog about stuff. Then everything else happened. Very briefly then:

Volebeats are my new super duper fave band. They've only been around for twenty years. It takes a while for things to reach me up here. More about them later.

RIP Philip Jose Farmer. He was a science fiction writer when you had to be nuts to write science fiction. I don't think about them much anymore, but the SF Philips, Jose Farmer and K. Dick, were huge influences on me. Sometime in the future, when we are having sex with giant sentient mollusks, we will have forgotten John Updike and John Cheever, but we will remember Philip K. Dick and Philip Jose Farmer.

And finally: Transportation workers care about you. We are safe and conscientious and occasionally heroic even when our bosses do not give a fuck. I knew a bus driver who managed to get his bus off the road and pull the parking brake while he was having a massive heart attack. The latter act required him to bend over and pull up on a handle with fifty pounds of resistance. He was dead before his bus stopped rolling, but no one else was hurt.

So it turns out that Chesley, "Sully" Sullenberger, the guy who landed his airplane in The Hudson with no loss of life, has had his pay cut by forty percent in the last few years. What's more, there's no pension waiting for him when he retires. His bosses needed that money for themselves. Remember all of those articles that mentioned that he also runs a consulting business? Between his two jobs, he's been working seven days a week for years, just to keep up.

Bastards.
Posted by Your driver at 11:53 PM No comments:

Move along, no funny poems here

If Emily Dickinson used emoticons. At Vowel Movers.
Posted by Your driver at 7:59 PM 1 comment:

My place in history 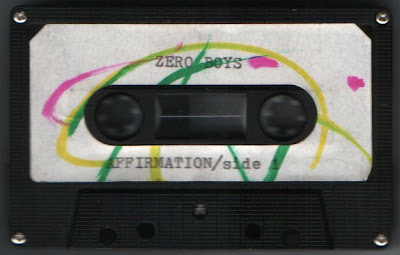 It is a strange experience to pick up the newspaper and see a picture of some guys you knew thirty years ago. So, today, I first pick up The Bay Guardian, and there's an article on the big Zero Boys reunion tomorrow. Then someone hands me a copy of the worthless SF Examiner (Now Free! And worth every cent of it!) and there, on the front page, is a picture of the Zero Boys.

In, like, 1980, I briefly managed a record store in Indianapolis. It was a dismal failure and I found myself out of a job and homeless on Christmas Eve. Two of my employees were girlfriends of a couple of Zero Boys. The Zero Boys themselves would come in the store sometimes. I saw several of their shows. Everyone was excited because soon, they would be releasing their new record.

Everyone agreed that The Zero Boys were the tightest, most professional, and most ambitious punk band in Indiana. The trouble was, back then, tight, professional, ambitious and punk were not necessarily words that went together.

At the dawn of Reaganism, there was a lot of talk about winners and losers. Most people were losers and that was just too fuckin' bad for them. I was a loser, that much was certain, and I liked my punk sloppy, amateurish, self destructive and nihilistic, just like me.

Anyhow, the Zero Boys were all set to be big stars and it never really happened. They had a regular gig playing all age shows at a pizzeria. I suppose it was too bad because their record was really pretty good. In fact, it was so good that it just refuses to die. Every few years, someone seems to reissue it and the Zero Boys get called up to bring back those oldies but goodies, kind of like Sha Na Na.

They weren't bad guys. They've gone on to distinguish themselves in other walks of life. Some guy in Berkeley just offered to pay for them to have an all expenses paid weekend getaway in San Fran. Good for them. Now, would you darn kids out there go invent something new. Preferably not lame.

Speaking of back in the day, I met Vaughan Bode's son. He's a grafitti artist. Seemed like a nice enough fellow. He had some old guy (my age) with him. The old guy was probably famous too. He's got a show coming up at a peculiar rich kid grafitti artist gallery. Probably worth seeing.
Posted by Your driver at 6:51 PM 2 comments: 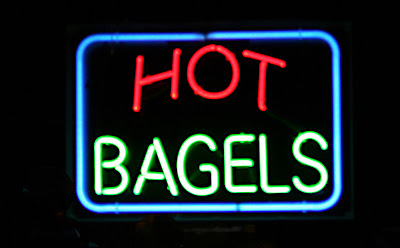 The great Frank of Ex Con Alcoholic Addict's Etcetera drove past me early this morning. He knew I was somewhere in the neighborhood, so he honked his horn as promised. I have yet to meet him face to face, but now I know what the back of his head, not to mention his van, looks like. Who else is local? SF Mike from Civic Center, feel free to drive by and honk some morning.

Nice to hear from you Frank.

Oh, the camera arrived this evening. Pictures, by me, to follow.
Posted by Your driver at 7:28 PM 1 comment:

In which I acquire things and enjoy happy circumstance.

I got my tax money. I got a three day weekend. I got a fabulously cool new Pohaku ukulele. I read a review of point and shoot cameras and ordered one. I got word from Madame Pamita that she will be playing in Santa Rosa at the end of April. Details and pictures to follow.
Posted by Your driver at 7:39 AM 3 comments: 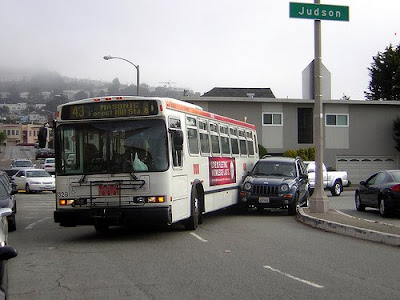 I got several useful replies to my earlier post. Here's the best reply I could come up with.

Thanks to all of you. SF Mike, you asked a good question. I thought I was starting a little newsletter for a few of my friends. They hardly ever come here. Instead, I'm writing for people that I don't know. I'm not too sure what they find interesting.

What I find interesting is that I walk around the city for at least a couple of hours every day. I'll have to admit that your Civic Center blog has gotten me to pay closer attention to what I'm seeing. Another great SF photo blog is 'What I'm Seeing'. His pictures often appear on SFist. I walk around the same neighborhoods as you two, but I seem to notice slightly different things. Sometimes I wish I was taking pictures of them.

As far as writing about transit goes: It's not that I consider it a dull topic. It's just that I'm so involved in it that it would be like writing about my skin, or the air that I breathe or maybe even gravity. It's so close to me that I have no useful perspective. Also, Bus drivers are always saying that there is no way to explain our lives to non bus drivers. That's been my experience. I usually end up having to say something like, "Look, my job is the way my job is. You'll just have to accept that." This is particularly true of girlfriends, most of whom have never been able to understand my schedule.

In that sense, we're a lot like cops. We tend to hang out with other bus drivers and to talk among ourselves in bus company jargon. There's a very us and them feel to a lot of conversations.

I put a lot of effort into getting out of that little subculture and thinking about other things. I like what I do, and I value my relationships with other workers, but I try and come up for air pretty often. That's not easy, because a short work week is 60 hours. I usually end up at work for something closer to 65 or 70 hours a week.

Right now, I'm thinking I'll take some of my tax return and use it to refurbish an older laptop. I'll hook it up to a camera and try and work on the blog from the public library or some other public wi fi spot. Trouble with that is that I also need that time to exercise, to read and to practice my ukulele.

Right now I need to go to sleep.

Thanks again.
Posted by Your driver at 6:46 PM 2 comments: 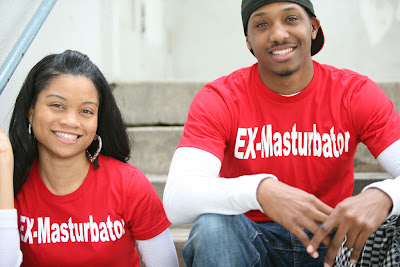 If I didn't have to get up at 3:30, I would tell you all about the time the Buddhist teacher winked at me. It was a moment that was loaded with metaphors.

Sorry about Lux Interior.
Posted by Your driver at 8:03 PM 1 comment:

Sometime soon, I'm going to do one of two things with this blog. I might just buy a camera, set up an account at a file sharing site, start taking lots of pictures of my daily walks and publish them along with real, downloadable fer yer enjoyment, music files. Then again, I might just give the whole thing up.

I know I have a few fairly regular readers. Let me know what you think. Delurk yourself, if you would be so kind.
Posted by Your driver at 7:50 PM 9 comments: