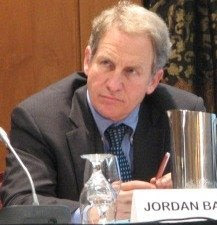 I'm really happy about this. Jordan Barab has been appointed the acting head of OSHA. Most young workers have never heard of OSHA. It's the Occupational Safety and Health Administration. OSHA is supposed to enforce laws that guarantee the health and safety of workers.

For most of the last thirty years, that is, for most of it's existence, OSHA has been getting weaker and weaker and smaller and smaller. The free market crowd considers job injuries and illness to be a necessary cost of economic growth. As is always the case when those people start talking about necessary costs, they mean that someone else has to pay the price. So, nobody enforces workplace safety rules and all we ever hear on the subject is that Worker's Comp costs are "Out of control". It's those damn workers. If we would just stop whining about our damned agonizing injuries then the people who matter wouldn't have to worry about anything getting out of control.

So the bad news is that OSHA is understaffed and underfunded. The good news is that Jordan Barab is a real advocate for workers. He gave up his blog, Confined Space, a couple of years ago, but it is still worth looking over. I was a regular reader. Tammy Miser has continued one feature of his blog at her Weekly Toll Blogspot. It's a report on who died on the job this week. I intend to avoid farm labor, construction work or work in convenience stores.

Barab took it upon himself to tell the story of workplace fatalities because he really cares about people who work for a living. I'm not happy with Obama's expanded war plans. I'm dismayed, but not surprised that he is protecting the super rich. I'm moderately hopeful that Jordan Barab can save a few lives.

Which Side Are You On?n - Dropkick Murphys