True stories to the best of my recollection 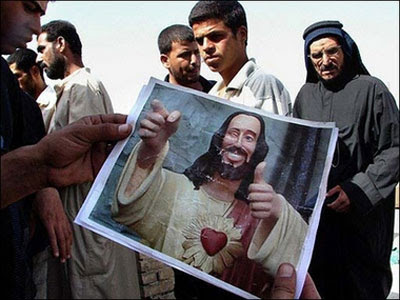 This guy gets on my bus. He’s wearing a white robe and rope sandals. He ‘s a white man with long hair and a beard. He says to me, “I’m Jesus.”

He says, “No, really. I’m Jesus Christ. Let me show you.” And he shows me several credit cards issued to Jesus Christ.

I’ve found that it is best not to engage with these characters. If he needed help, that would be different, but, really, I’m an equipment operator, not a therapist. I said, “Oh, yeah, uh-huh”

A few minutes later a hippie girl got on. She looked quite a bit the worse for the wear. She sat down next to Jesus and Jesus asked her how she was doing.

“I was just up at Reggae on the River, man.” She replied.

They got to talking. At one point Jesus said, “I used to ride a Harley!” The hippie girl allowed as how that was pretty cool.

A few minutes later the dysenterry ridden hippie girl got off the bus. Jesus followed her off with a smirk on his face.

Another night a bunch of guys who’d just been released from San Quentin got on my bus. The last one on the bus was a tall skinny white kid. It was cold and pouring rain. The kid was dressed in prison issue surgical scrubs and paper shoes. He was shivering pretty hard.

There was a crazy lady in the front seat. She had her stuff stacked up all around her in plastic garbage bags. She’d made a sort of a nest out of old newspapers and garbage bags. Crazy people do that a lot, build nests.

The kid couldn’t find a seat. When the crazy lady saw that, she started rearranging her nest and yelled, “Here, c’mere, sit down here. Plenty of room!” The kid thanked her. “Just let you out of the joint. Huh?” She bellowed at him. He shrugged his shoulders. “They’re letting guys out of the joint so they can put more guys into the joint! Am I right?” He shrugged again. “Where you gotta get to?” She asked.

He mumbled back, “I gotta catch a train to San Jose.”

“San Jose! That’s a long fuckin’ way. It’s cold out! Here, I got something for you man!” And she started digging around in her garbage bags. She came up with a Pendleton wool shirt that had been washed and shrunken down to toddler size. “Here. Try this on!”

The kid squeezed into the shirt. It was so small that the sleeves barely reached his elbows, but he was so skinny he managed to get it buttoned up. He looked a lot warmer. Just before he got off the bus, he dug around in his manilla envelope and came up with a twenty. He handed it to the crazy lady.

Cat To The Rat - Danny Barnes
Posted by Your driver at 4:38 PM

So you really did drive Jesus around. Cool story

Yep, that illustrates perfectly the big dilemma of the moment: should Jesus save ? Or should he help buy the economy out of the hump by spending on his credit card ?

Ib, I laughed out loud. That reaction never occurred to me.

A little laughter goes a long way, brother. Jesus, if we keep this up it might not be such a bad Christmas after all.

Oh, I could tell Christmas Horror stories for days. Many years later, they seem fairly funny. I have to say, I didn't have a young son to worry about, but if you want tales of drunkenness, unemployment, homelessness and desperation, a lot of mine are set at Christmas time. I have to laugh now.

Thanks Jon. I like Crazy Bus Ride Posts. Keep them coming.

I think I met that Jesus guy once.

Great story and a sweet ending. As a very lapsed catholic with absolutely no tendency towards investing anything other than a smirk at the word "spiritual" yet in thrall to the residual pineal religious trigger we all share; I was calmed and reassured in a most scientific proof of evidence of Jesus abstracted to a smile and a bit of human warmth.
merry happy jolly!

you got come READ some of these some first or third wednesday at the northpoint cafe -- 1250 bridgeway in you know where (just up from what used to be cafe trieste).

Martin, I'd like to come read them, but weekdays are not gonna happen. I've got my work week down to 63 hours, but I'm still not likely to have the energy to drive down there and back on a work night. Sounds like fun though.